Exploring themes of transportation, communications, space, and computer technology, CSTM is a highly-accessible, artifact-rich exhibition that is augmented by a plethora of bilingual digital interactives and mixed human-computer exhibits.

Exploring themes of transportation, communications, space, and computer technology, CSTM is a highly-accessible, artifact-rich exhibition that is augmented by a plethora of bilingual digital interactives and mixed human-computer exhibits. 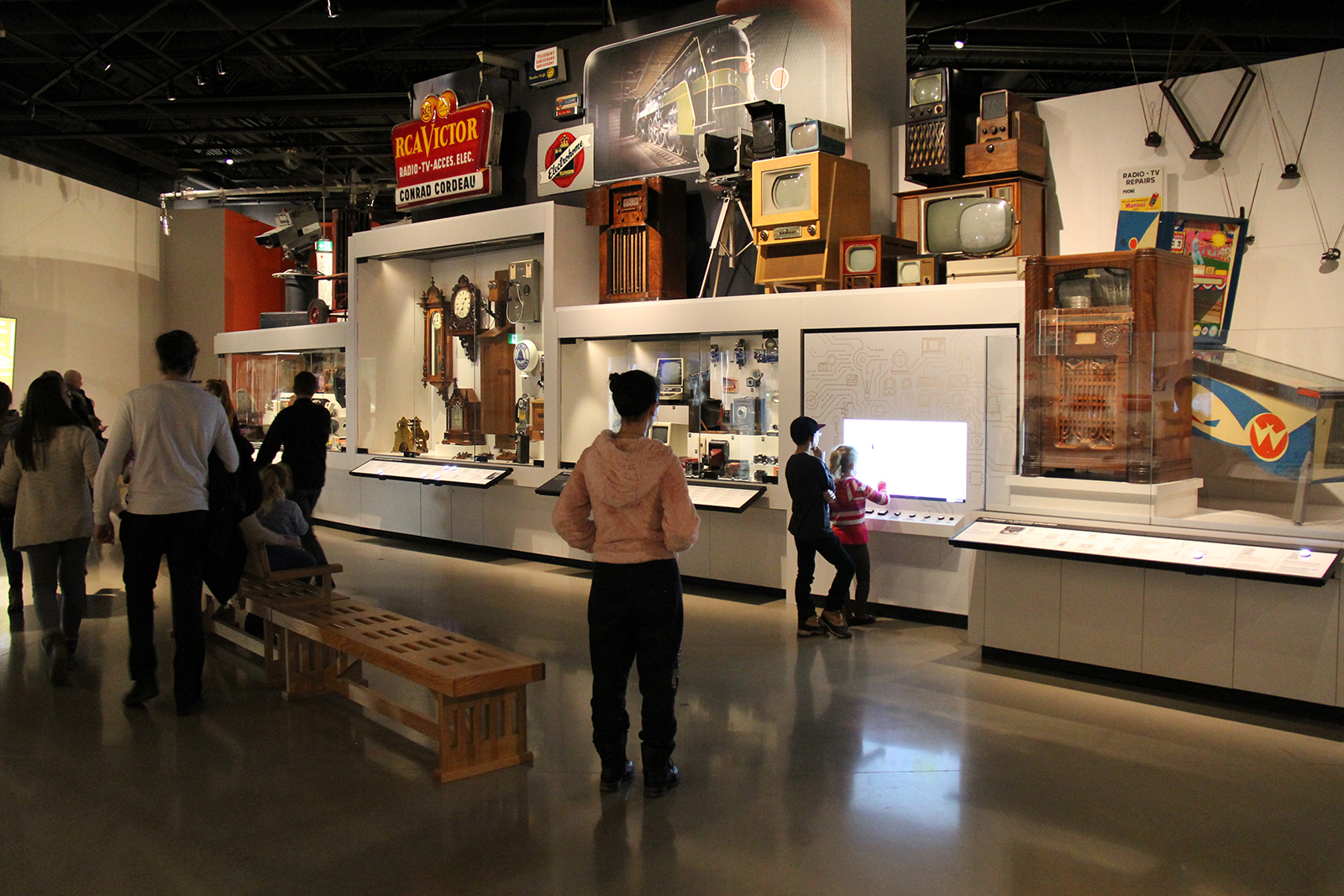 In November 2017, CSTM re-opened its doors following a 3 year renewal. With 80,000 sq ft of space, the new museum is ‘a meeting point between past, present, and future’. EDM was contracted to provide the software infrastructure that underpins the entire experience as well as design and develop several key visitor-facing interactives.

The interactives on the floor are controlled by a customized version of EDM’s Smart Exhibit Environment. This digital infrastructure includes:

Smartphone is a snappy and light-hearted drag & drop game that challenges players to identify which existing tools and technologies are available on today’s smartphone. Some options like a calculator or camera are obvious, but other tools may surprise the players.

EDM used a ‘smartphone-inspired’ graphics style which helps visitors immediately understand the context of the game. For maximum replayability, the application randomly loads a unique set of tools and technologies each time the game starts. 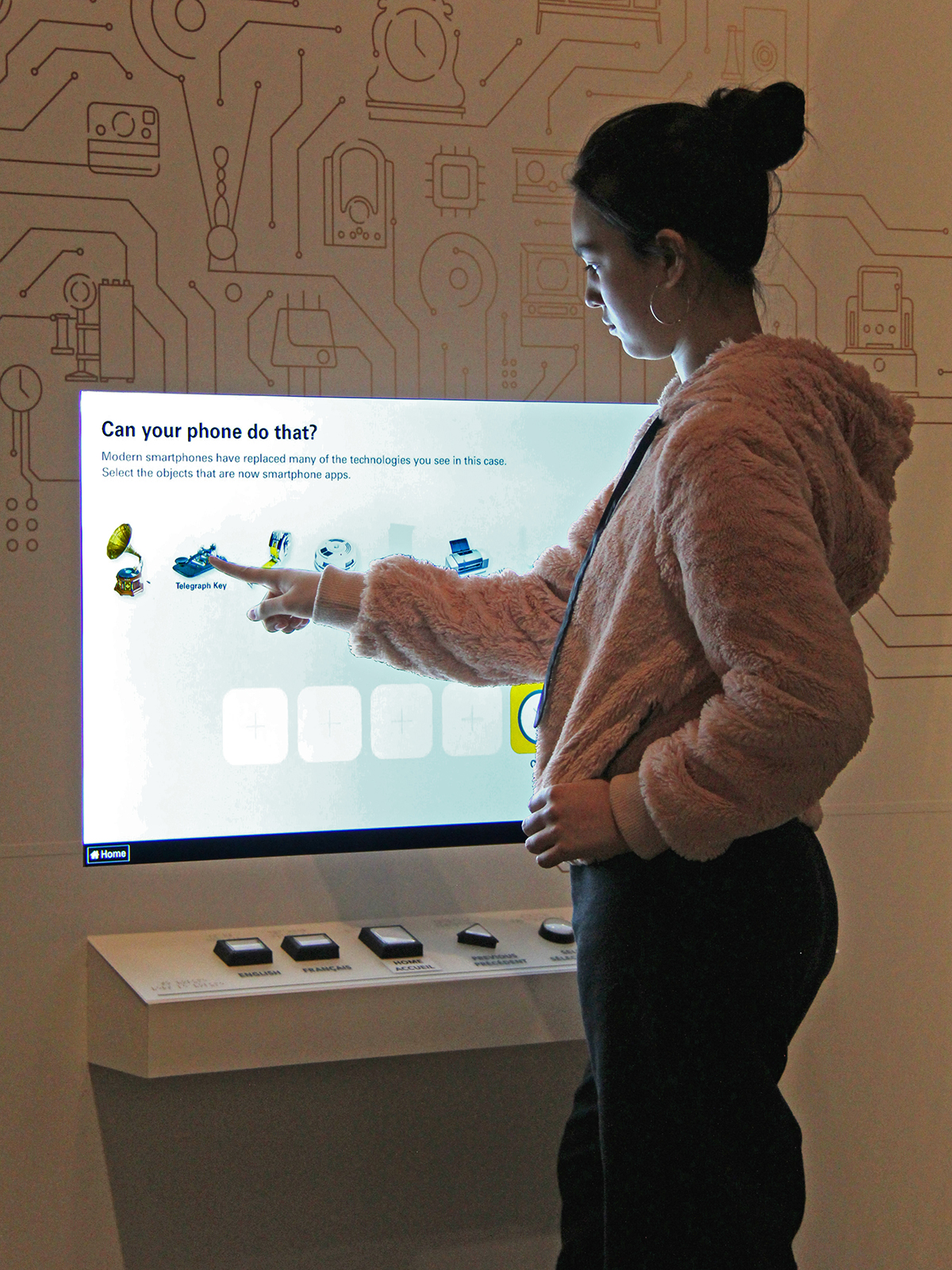 PopUp Science is the first digital exhibit that CSTM visitors encounter. This exploratory interactive sets the tone by encouraging visitors to examine the hidden technologies that facilitate modern life.

Approaching the interactive, a slideshow of colourful, everyday scenes is projected on a large wall. Directly in front of the wall, a large touchscreen monitor shows the same images and prompts visitors to ‘look closer’ at the subject matter of each scene. As the visitor engages with the touchscreen, the overhead projection follows along and zooms into sometimes microscopic detail—revealing bite-sized pop-up stories about everything from textile tension to a video explaining the refrigeration cycle.

As this exhibit is intended to be refreshed frequently, all of the bilingual content can be edited through the museum’s centralized CMS. Curators can easily add new images, select popup locations, and author popup content that containing text, imagery and video. 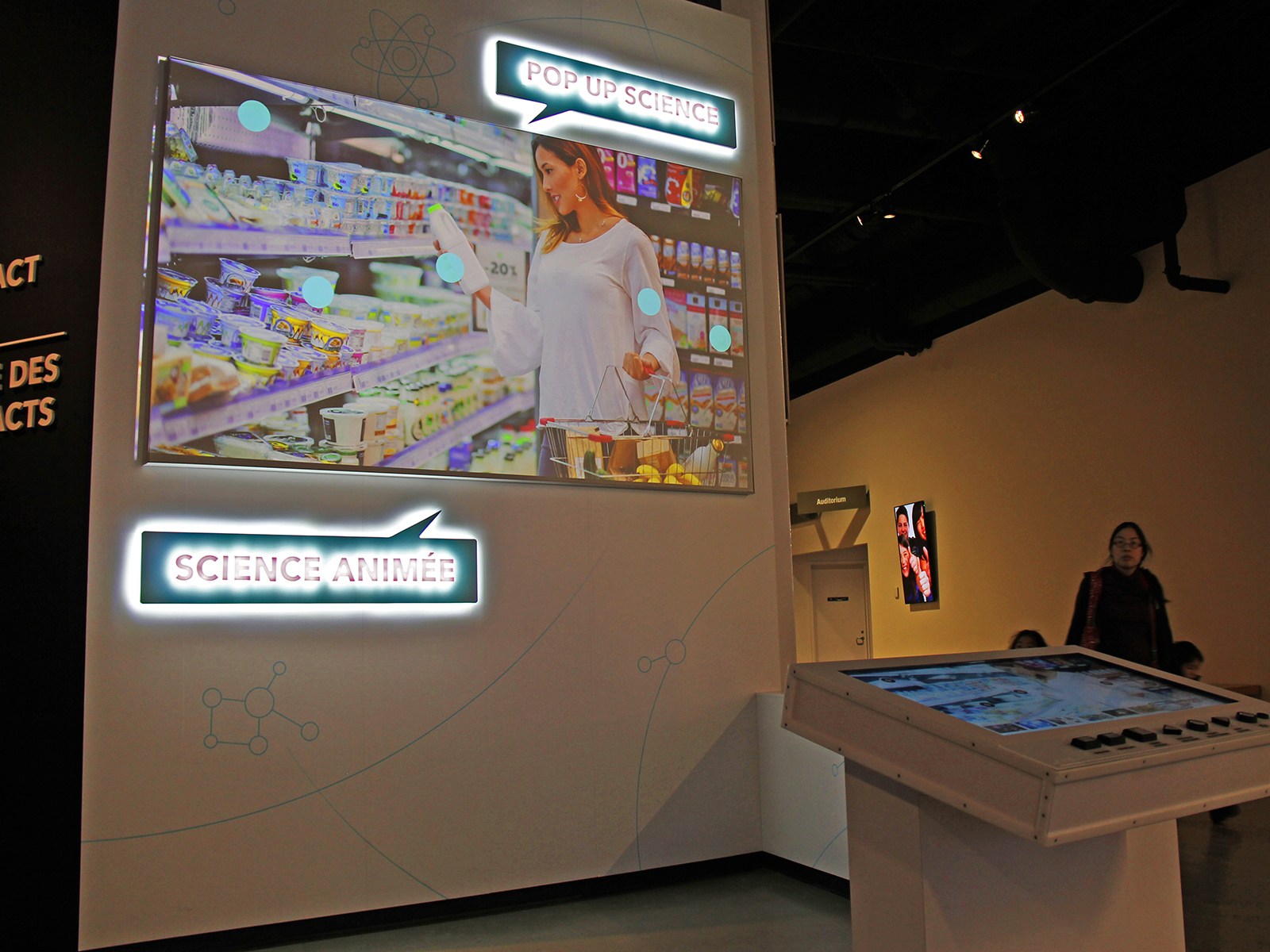 Captain of the Ship

This exhibit sits amongst an impressive collection of ship models and nautical memorabilia. Its intent is to provide young visitors with the sensation of piloting a large vessel on open water.

A replica ship’s wheel is mounted in the notional wheelhouse of an old diesel ship. With the wheel untouched, the ship idles somewhere off of the Pacific coast. When a visitor moves the wheel, the engines roar to life and the ship moves steadily across the water. Occasionally a flock of gulls cross the bow or we pass a navigation buoy. Visitors can steer the ship in any direction … although the simulation is configured such that you’ll never actually reach the coastal mountains and islands on the horizon.

Created with the powerful 3D game engine, Unity, the relatively simple “gameplay” of this interactive is intentional. Owing to its location in a high-traffic area of the museum, we needed to keep dwell times down while still delivering on the expected photo-realistic experience. 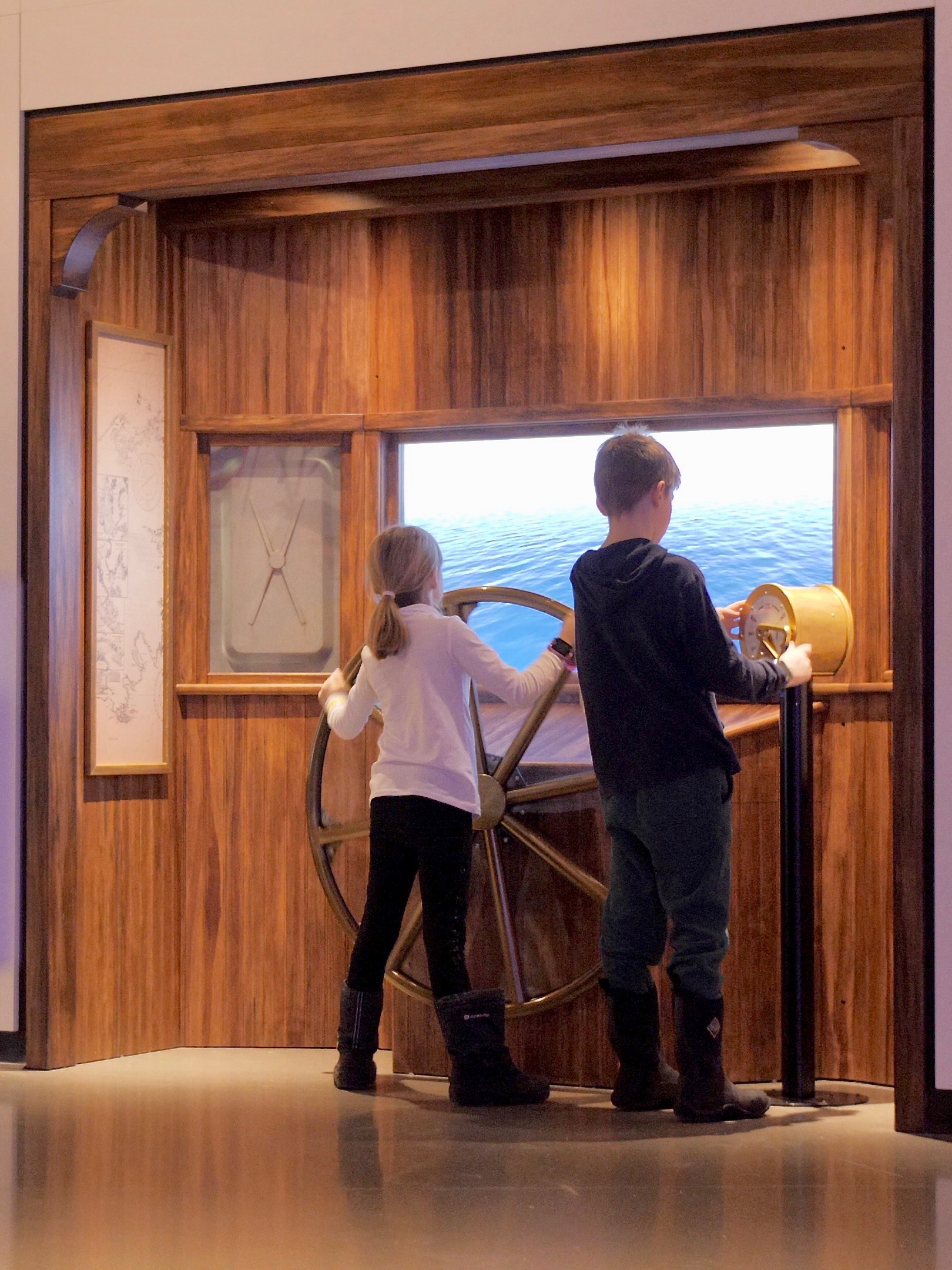 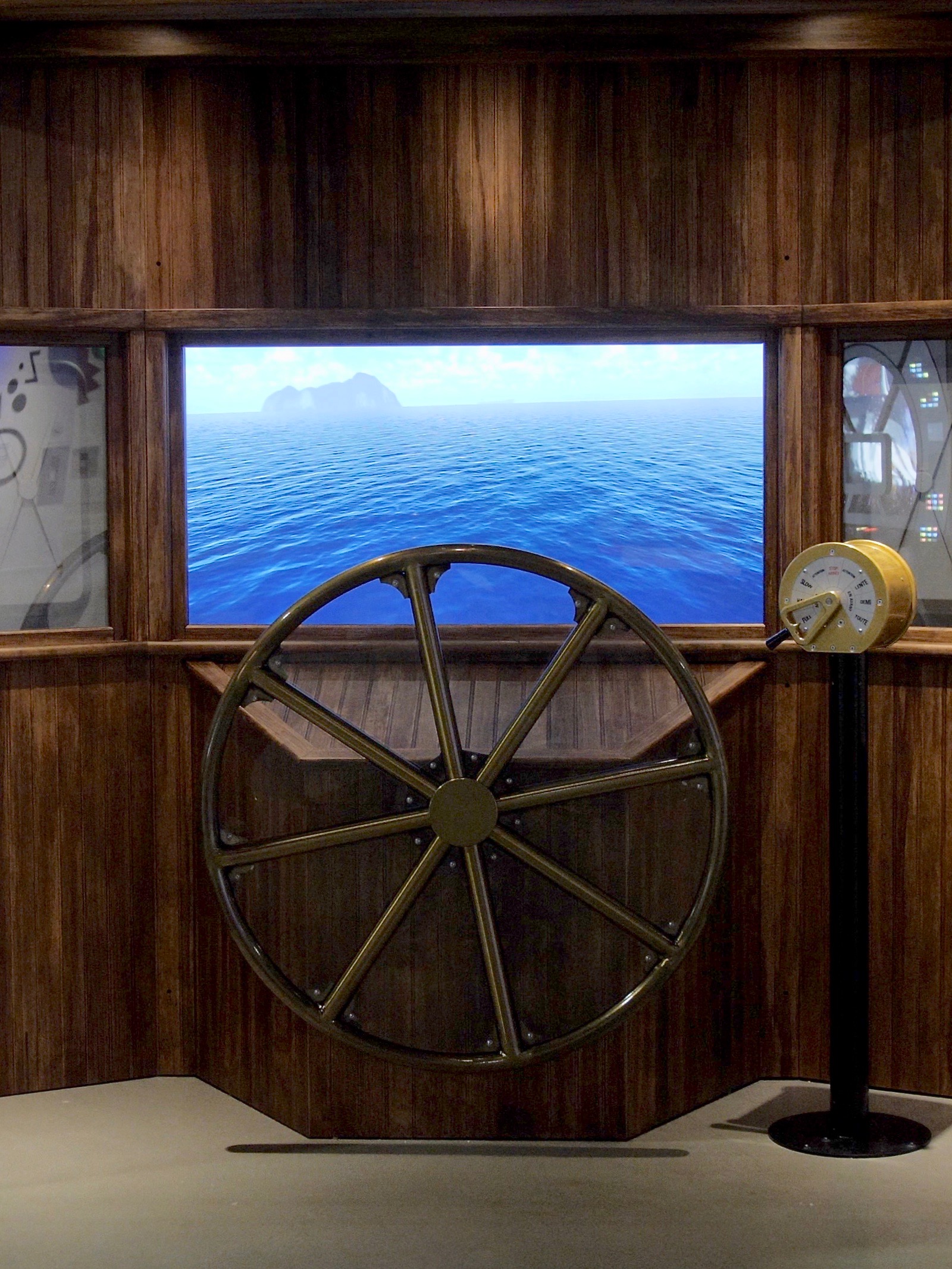 Winterscape is an immersive nook aimed squarely at the museum’s youngest visitors. Situated amongst a collection of artefacts representative of Canada’s famed cold and snowy winters — old snowmobiles, sleighs, etc. — Winterscape evokes the feeling of trudging atop pack ice in the Arctic twilight. When a visitor enters the alcove, a motion sensor triggers overhead fans that simulate a winter breeze, the cracking sound of ice can be heard, and a seal flits by beneath the water’s surface. Eventually the seal surfaces for a quick peek around before dropping back down and away from the curious visitors.

EDM handled the digital portion of this interactive, crafting the realistic water and seal animations that play on the masked HD screens under the floor. This an example use of EDM’s Media Player with triggered playback (described below).

Kids react to the winter scenes beneath their feet 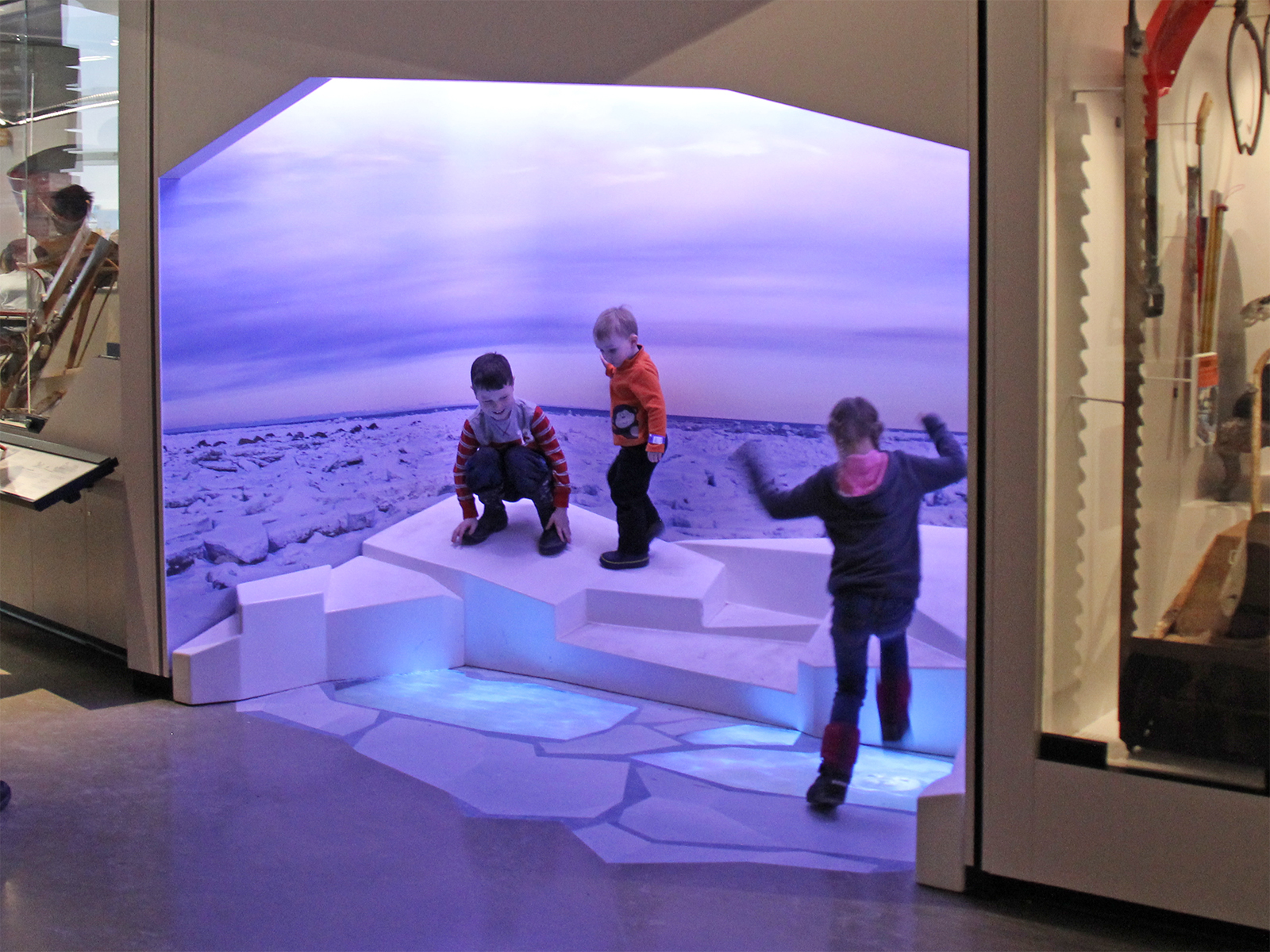 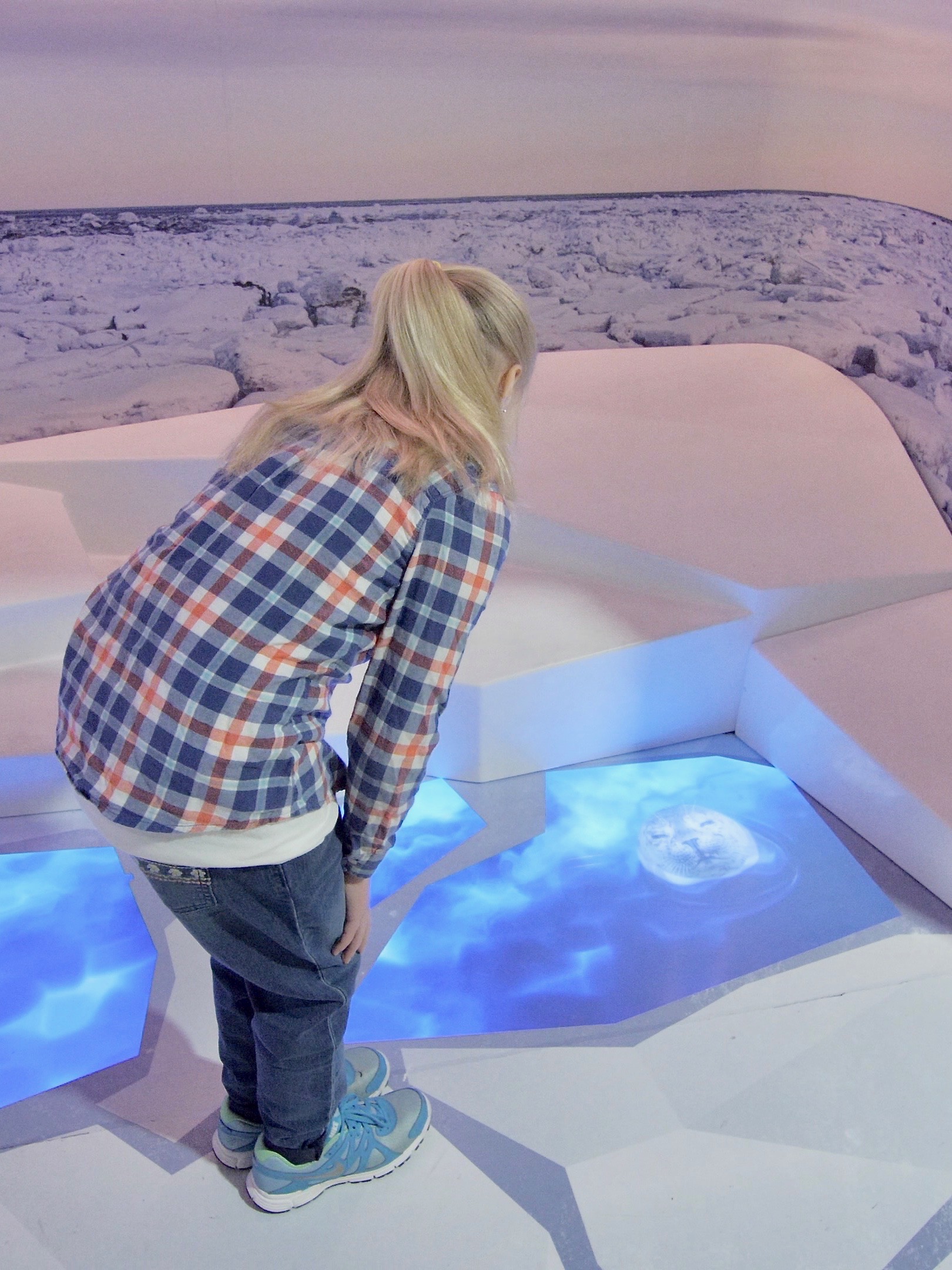 This playful interactive is part of a cluster of exhibits on human perception and illusions. Face Flip presents a novel demonstration of the so-called “Thatcher Effect” wherein an inverted pair of eyes and mouth easily spotted in an upright image, aren’t noticeable in the same flipped image.

Visitors pose in front of a camera, then identify their eyes and mouth onscreen in the photo. They are then shown an upside-down version of the same photo. Except it isn’t exactly a flipped image—the visitor’s eyes and mouth remain upright. Many people struggle to spot this fact until the image is shown in its normal orientation. Scientists use experiments like this to better understand the cognitive modules involved with facial recognition. 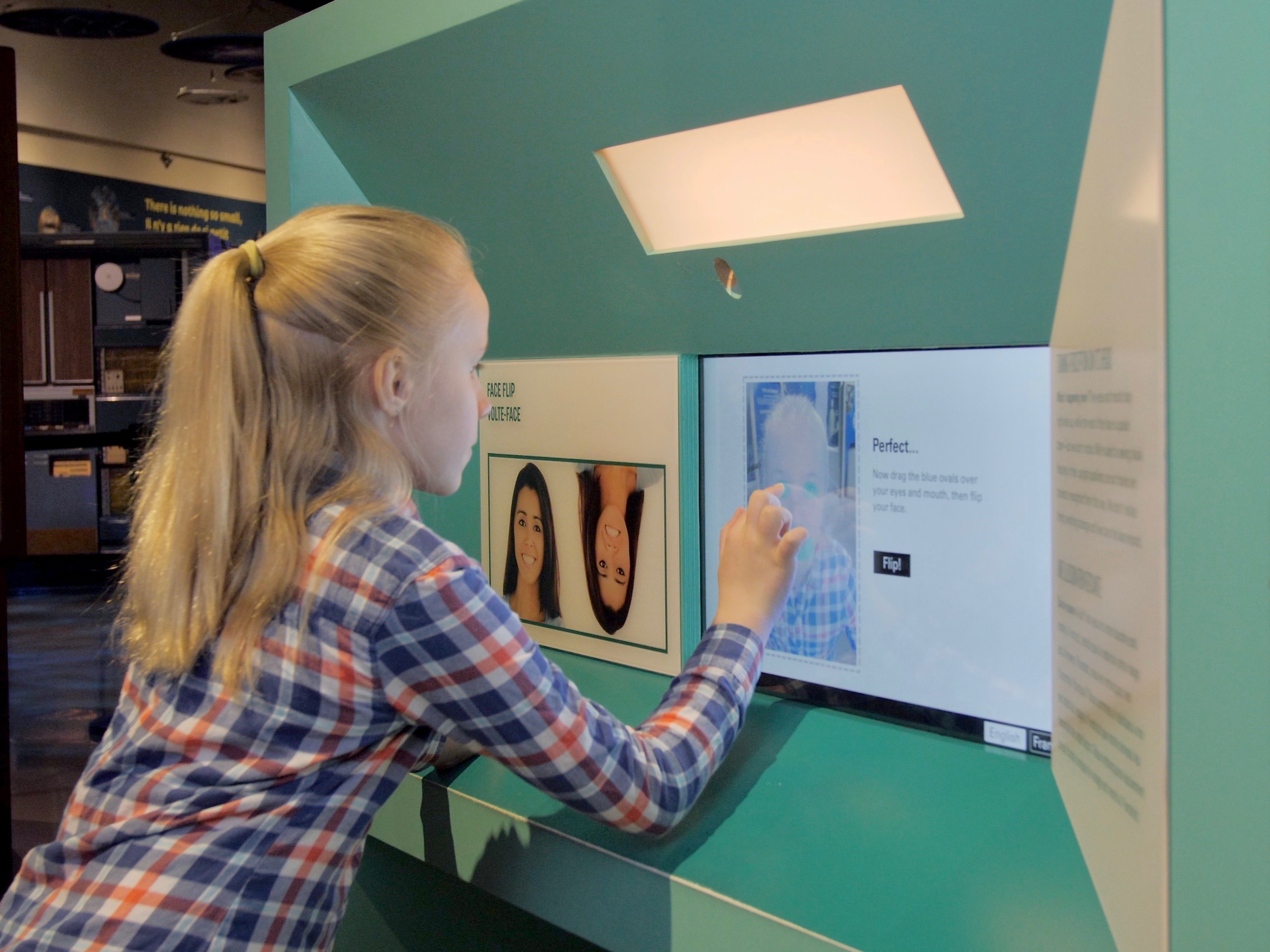 Illustration of the Thatcher Effect. The middle and right-hand images are identical.

Rather than use a 3rd-party media player, CSTM choose to license EDM’s tried-and-tested Media Player for playing video content on 27 different screens throughout the museum. EDM’s Media Player application is based on the macOS media frameworks, can play multiple 1080p streams simultaneously on different screens, and can pass-through multichannel audio. Importantly, Media Player, is fully integrated with the larger Exhibition Management and Analytics Systems. It provides frame-accurate playback with seamless looping, or triggered via buttons or sensors.

All digital content that is deemed to be an essential experience at CSTM was made available in a fully accessible format. In addition to exhibit lighting, screen height and reach range as key considerations, EDM also ensured that all digital audio and video elements meet minimum accessibility requirements. This includes consideration of audio cues, volume, scale, colour and contrast, as well as ensuring that functionality and operation of the interactives are intuitive and effortless. Tactile controls and output ports were also added in order to provide an alternate method of operation and information retrieval.